Belize is a tiny country, and home to the world’s second largest barrier reef. It is a Scuba divers paradise with warm waters, and a treasure house of marine and coral life. Dolphins, turtles, manta rays, harmless sharks and barracuda swim beneath the iridescent waters and we were eager to swim amongst these animals. We arrived at the Belize border after lunch. It was a simple crossing that included the usual immigration and vehicle permit paperwork.  However, it is mandatory to purchase liability insurance in Belize so Tom went off to do that.  Tom made an error in his payment paying double what he should. The official quickly corrected it and made sure Tom got his money back and for his honesty, Tom gave him some money as a token of his appreciation. We then drove to the nearest town and booked into Caribbean Village campsite. The camping facilities were simple but adequate.

We were preparing for supper when a man arrived at the campsite fence waving frantically to get our attention. It was the official from the insurance company at the border, he had driven to find us and was hoping we were at the campsite because Tom had left his drivers license at the office and he wanted to return it. He had specially driven to Corozal after work to find Tom. Welcome to Belize.Henry Menzie the owner of the campsite was extremely helpful and full of great advice for traveling in Belize. We decided we would fly to Ambergris Caye, a 15-minute flight across the ocean to the town of San Pedro on the island. Henry would take care of our truck while we were away and the following morning he drove us to the airport.

We arrived in San Pedro early in the morning and headed off to find a hotel and arrange for some dive trips. We did not have to wait long. In San Pedro  few tourists walk most whizz around in a golf cart, despite being able to walk the length the town in 30 minutes. What is that about??

That afternoon we were heading out across the clear waters to do some scuba diving and snorkelling.   We entered the water and the wonderful world of marine life, a turtle was the first to greet us, poking his head up before descending down.

Large school of colourful fish swam amongst the colourful coral. We had never dived in such clear water the visibility was about 160 feet. It was fantastic. Once back on the boat we headed off to do some snorkelling with nurse sharks and manta rays. I felt some hesitancy on my part to jump into the water with a large creature looking exactly like a shark. After a pause, I jumped and watched in amazement as the large brown nurse shark swam past. Beneath me, the manta rays glided effortlessly through the sea grass and sand.  Heaven does not get much better than this.

We left the warm sea and beaches of Belize and headed south to explore the jungle areas of Belize.

Belize is so tiny that it only has one main road heading south, but we got lost. How on earth we managed to miss the only tarred road going south will forever remain a mystery. Getting lost is a real blunder for us as we do that so seldom, and in a country with only one main road in which it is almost impossible to do. But we did it and soon realized we had missed a turning somewhere as the road slowly deteriorated into a dirt track in the middle of miles of sugar cane, we had achieved the impossible, of “getting lost in Belize.” In true Belizian style the locals waved us down to tell us we were lost, oh yes we knew we said but as long as the GPS said we were heading south we would be fine. Finally back on the main road we headed to for our destination, a tour we had booked for a boat trip up the river to the Lamanai Mayan Ruins located deep in the jungle.

As we cruise slowly down the New River we enjoy the interesting tropical river and bird life.

Some of the adaptations are spectacular such as the Jesus Bird which has very large splayed feet allowing it to walk on the water lilies.

Our guide Ronnie from Reyes and Sons was wonderful and an expert at spotting some of Belize’s wonderful birds and mammals. Howler monkeys screeched overhead and spider monkeys played in the trees, birds were everywhere and crocodiles lazed on the shore. However the most fascinating creature we saw were the insect bats. I have attached a photo of 5 of the little bats hanging onto the tree branch. I have never seen such effective camouflage. I stared at the branch for several minutes, but I could not seen them despite being told that they were there. This really was a day of “where are we and where are they?” Suddenly I spotted one but only because the wind blew its little hairs. I have posted a picture and they are there clearly visible. They are tiny only about 2 inches in size.

We explored the Mayan ruins of Lamanai, and had a tasty locally cooked lunch on the banks of the river before heading back. There is evidence of Mayan life that dates from about 1500 B.C. through Post classic (A.D.950 – 1544) and Spanish colonial times (A.D. 1544 – 1700). Lamanai was once the largest Mayan ceremonial site in Meso America. During the Spanish Conquest of Yucatan, Spanish friars established two Roman Catholic Churches here, but a Maya revolt drove the Spanish out. The British had also settled in Lamanai and built a sugar mill.

That evening we found a wonderful campsite, run by a lovely family, who invited us to join them for an evening of playing dominoes, drinking the local beer Bilikin and eating mom’s home made cake. They have just opened the campsite and were keen to make us feel very welcome.

It is also a park and as it was Sunday so there were many locals visiting. The children were fascinated by our camper so I invited them inside. I had 8 giggling children all trying to squeeze inside, they were amazed at our bed, our little stove, sink and fridge and I could see some of them dreaming of one day having a little camper and going off to explore the world.

The following morning we were woken up by the Howler Monkeys in the trees above our camper. They make the most awful screech. We left for an early morning walk through the jungle on one of the trails, and no, we did not get lost but I was really lucky as I saw a large snake. I nearly stood on it before it slithered away I am not sure who got the biggest fright me or the snake. I have since seen several more snakes, I am not that fond of snake although I find them fascinating.

We really wanted to see a jaguar in Belize, but because seeing them in the wild would be extremely unlikely we headed to the Belize Zoo. It actually has been closed since the damage done to it by the hurricane, but is now open. The zoo is wonderful as the animals are all found in Belize and so the enclosures are exactly as the animal would live in the wild. The jaguar is a nocturnal animal but we were lucky as he was “awake” and looking around while we were there.

We arrived at the Blue Hole National Park and immediately headed for the cool turquoise waters of a collapsed cavern.The hole is actually a stretch of an underground river whose course was revealed with the roof of the cavern collapsed. Tom swam and I waded out up to my waist in my clothing as I did not have a bathing suit. Little fish nibbled at my legs as I enjoyed the thrill of being cooled down. It is sweltering hot in Belize. We explored St Herman’s cave that was once a ritual place for the ancient Maya and that evening we camped in the parking lot of park.

Cockscomb Basin Wildlife Sanctuary is a prime location for bird watching and also a location where some of the last remaining wild jaguars wander. We arrived and decided to take a night hike with a guide. After paying our money we began to have second thoughts, “what exactly are we going to see in the night in a jungle?” the answer not much at all. Yes we heard some strange noises, saw some insects but not much else more. What were we thinking when we paid to go for a walk in the dark? 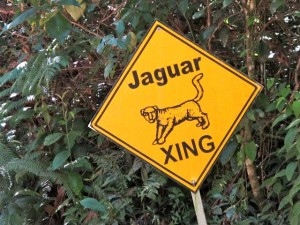 The southern coast line of Belize has the best sandy beaches and we discovered where all the rich Canadian and American retirees hang out. We hung out on the beaches and I could not believe how warm the ocean waters are. It was so tempting to linger longer but we knew we needed to continue south.

We are now in the southern town of Punta Gorda and today we will start our trip back up north of Belize to explore the Cayo district before entering Guatemala next week.