Traveling as a couple there are a certain number of “differences of opinions” that need to be resolved. Living in such small quarters for extended periods has certainly challenged us in making decision such as, “is there anything else we should travel with?” I suggested taking along a real friend like a dog, someone who would always agree with me, never contradict me and always love me unconditionally. 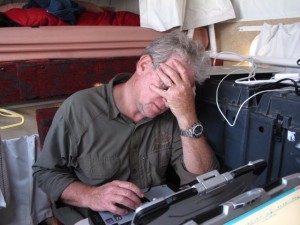 And Now Janet Wants a Dog

Tom refused this idea, saying that we could get a dog again when we settle down. The argument is ongoing, as people do travel quite successfully with dogs, but even I thought traveling with 28 dogs would be hard work.  The couple camping next to us were on route to a dog show, but taking along 28 dogs, the youngest being 3 weeks old, would even be too much for me. The campsite we were all staying at also had the most unusual toilet doors; transparent shower curtains, so you could see who was watching you as you did your business, quite disconcerting even for this well travelled 3rd world traveler. It was a spooky business all the moving parts behind the curtains, at least there was no wind to blow the curtains open. A bit like a Stephen King movie set or the Hitchcock movie “Psycho.”

The Henry Ford Museum located in Dearborn near Detroit was excellent but the most fascinating to us was seeing how vehicles emerged as fun “camping and touring” vehicles. From the VW camper van, to the Airstream, to tents that could be attached to vehicles.  How far we come since the early 1900’s when a tent was mounted to the side of the vehicle so families could go camping. The tent trailer was born and is still going strong today.

The most fascinating of course was to see the Packard automobile called “Old Pacific” which was one of the first 3 horseless vehicles to be driven across the USA in 1903. Several months ago we watched the PBS documentary Horatio’s Drive, produced by Ken Burns; a wonderful film about Horatio Nelson Jackson who was the first ever overlander to drive across the North American continent. Driving a Winton automobile Jackson crossed the USA in 64 days. It was in this documentary we learnt about the Packer vehicle called “Old Pacific” so we were quite delighted to see the actual vehicle. Although Tom Fetch driving the Packer was not the first to achieve driving across the USA he was close behind the winner Jackson.

The poor and non existent roads in 1903 made it a dirty, gruelling trip. At one point Tom Fetch the driver of the Packard had to lay down canvas strips to enable the car to cross the sands in Nevada. In those days, it was true adventure and hardship to travel across the lands. The documentary is a must for anyone interested in adventure and overland travel.

In 1995, Hector Quevedo Abarzua and his son Hugo Quevedo Liberona drove a 1928 Model A Ford some 22,000 miles to the Ford Museum in Chicago all the way from Punta Arenas in southern Chile. The father and his son left their home on Oct 12 1992 with the equivalent of $5.00 in their pockets and a dream that Hector had cherished since the age of 12 to visit the Henry Ford Museum. Along the way they stayed in shelters and accepted donations to help them continue their journey and adventures. They arrived at the museum on December 2nd 1994. They returned to Chile but the overland Ford now resides in the museum. What an amazing vehicle.

The museum also houses some vehicles of historical importance, the car Kennedy was assassinated in, the bus Rosa Parker refused to go to the back of and many others.

Greenfield village located next to the museum is another must. Enjoying a sunny day we wondered throughout the village exploring such places as the shop the Wright brothers are said to have been the birthday place of aviation. The homes of such people as Noah Webster the author of the Webster dictionary, the store of Heinz the developer of ketchup and the home of the poet Robert Frost, and many more. The autumn fall colours of the trees and the migrating geese added to the delight of the day. We of course could have spent another day but tomorrow we head into Detroit. Till then travel safe all.

Harriet Beecher Stowe’ wrote a verse in her hugely influential 1852 anti-slavery novel “Uncle Tom’s Cabin”. Tom the slave himself apparently would sing the hymn in his darkest hours.

(The actual Uncle Tom’s cabin is located in Ontario).

Amazing Grave has now become an integral part of the USA becoming a “spiritual national anthem” and was sung at national disasters such as the September 11 attacks, the Oklahoma bombing and the Space Shuttle Challenger disaster. Inspired by the wrongs of slavery and still sung today at the wrongs by Americans. I wondered what John Newton could ever have imagined the people and descendants of the slaves he helped transport to America would one day still be singing this song. It is an amazing story.

We left Detroit after spending several hours at the Wright African American Museum, another must for anyone in the area. While in Africa we visited the stark and distressing slave forts from which an estimated 50 million Africans were housed before being shipped across the ocean in deplorable conditions, many dying on route.

We will now be visiting the locations where so many of these desperate people lived a life in slavery and hear the stories of the heroes who fought to abolish slavery.

The museum was our introduction to the history of slavery and the African American in the USA and those who escaped to Canada via the underground railroad.

We are now in our final days of route planning for our All American Road Trip- USA. We are still debating the exact route but are looking forward to discovering more of the USA and Americans. In researching “what is an American?” we discovered an American is among many definitions someone who has left a message after the beep.

We arrived back into Canada welcomed by rain, what else! I am beginning to think we are the new Noah and his wife. My umbrella is my constant accessory as we travel across America under a rain cloud. Soon we will be building an ark and then perhaps I can have my dog!

Best French Fries Ever are in Hamilton Ontario Canada