Now I Want To Go To China

Imagine discovering one of the greatest archaeological finds in history. In 1974 a farmer in China did just that; discovering the Terracotta Army of over life size 8,000 soldiers, 130 chariots with 520 horses and 150 cavalry horses. We were lucky to be in Toronto when the Royal Ontario Museum was having an exhibition of China’s now famous Terracotta Army. 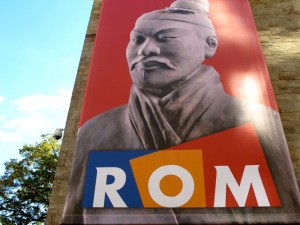 Built during the regime of the first Chinese Emperor Qin Shi Huang, the figures were built to protect him during his after life. They were buried with him in his tomb. How does any human being command such power over others? At least he built terracotta figures rather than using live humans to be buried with him, as they used to do 1000s of years ago.

Of course seeing the few figures and artifacts from China only deepened my desire to visit this country and to visit the actual site of the Terracotta Army. It is now on my bucket list.

We were not allowed to take photos or videos so I am including a picture from the web just to give you some idea of the magnitude of this archaeological gem. 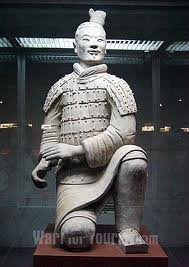 Terracotta Soldier on Display at the Ontario Museum 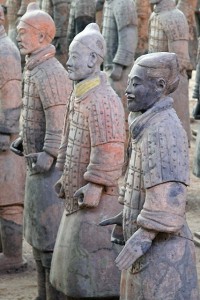 Finally it was time to say good bye to our son Derek and leave Toronto to begin our chase  of the fall colours. The hardest part of going on an extended trip is always leaving family and friends behind. I even dreamed of my work colleagues last night, must be missing them. 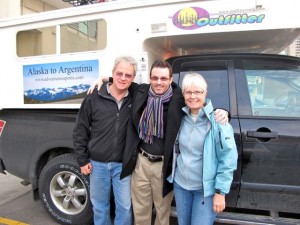 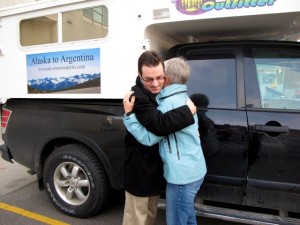 We arrived at the campsite beside a lake and enjoyed meeting fellow campers around a huge fire before heading for bed. The colours this far north are almost over so it is time to head south. We will be visiting friends in Ottawa and then on Wednesday (tomorrow) we will enter back into the USA heading for the New England states to see the fall colours.

We have already travelled 20,000 km (11,212 miles) since leaving Calgary for Alaska. I wondered how many kms we will travel before we return to Canada.  Somehow leaving Canada this time feels different as I don’t know when we will be back, it feels strange not having a fixed return date. Like bread without an expiry date, how long can it last? 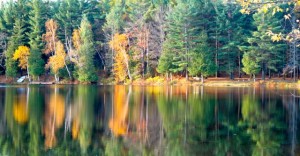 United States of America
USA
Chicago to Ottowa
We Reached the Atlantic Ocean, Ottowa to Boston